At TRFS, we support people to be as independent as possible, meet their outcomes and reduce their reliance on paid care.

Nathan’s story below is an excellent example of how a combination of the correct delivery of support and wrap around care has enabled him to now live completely independent after almost 10 years.

Nathan joined us on in December 2009 from the Child and Adolescent Mental Health Team.  Until 2103, the staff team supported Nathan to learn new skills that would prepare him for independent living.  In 2013 Nathan moved to his own flat, supported in this transition by his staff team.  Staff supported him to maintain his flat, pay bills and ensured he continued to take his medication which was keeping him well.

Nathan progressed so well he was able to provide peer support by volunteering with us, assisting another supported individual to cook as well as offering them social support.  He didn’t stop there!  Nathan also volunteered for ‘Your Voice’ and through this he was able to discuss his own situation and reflect on his experiences.  This, in turn, was fed back to the NHS/HCP to help shape change in these organisations respectively.  In addition, Nathan also worked voluntarily with the ‘Inverclyde Recovery Cafe’ through ‘Your Voice’ offering peer support.

In 2016 Nathan was asked to speak at ‘The Beacon Arts Centre’ on behalf of the HCP.  He spoke passionately about his personal journey to recovery.  Nathan was also the team captain of the ‘Real Richmond’ football team and successfully led them to become top of the league.  Nathan and his team proudly picked up a trophy and tickets to the Scottish Cup final.

In February of this year Nathan had a meeting with his Keyworker, Senior Support Worker and Social Worker where he requested for his paid support hours to be reduced.  Nathan expressed that he felt his time with TRFS was nearing to and end.  Finally, on 1st August 2019 Nathan had his last review where it was discussed how well he had progressed in dealing with both life stresses and his current employment.  He expressed he felt it was time to leave TRFS and it was agreed Nathan was ready to move on.

Staff congratulated Nathan on the achievements he had made in his recovery journey of almost 10 years at a celebratory lunch on 23rd August 2019.  As a memento of his time with us, staff presented Nathan with a friendship Quaich marking the end of this part of his journey.

Everyone at TRFS would like to say ‘Congratulations Nathan and good luck for the future’. 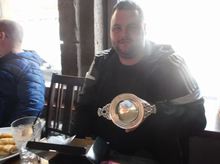