It's all going on in Harbourside!

In the past few weeks there has been comings and goings down at Harbourside in Irvine.

Firstly, Lynda moved into her own house in the town. Lynda had felt that she wanted to have a place of her own and a bit of peace and quiet.  Lynda and Pal, her dog, are having a great time and it was just what Lynda needed after the experience of sharing a house with seven other people.  Living at Harbourside helped Lynda build her confidence and self esteem, making her fitter and stronger to go out and enjoy her new house.

Coming in the opposite direction was Michael.  Michael is a well known face around town and never passes somebody by without saying hello.  When Michael came to visit the house initially, to see what it was all about, he hit it off straight away and felt like he was meeting old friends.  The residents who already knew Michael made him feel at home and welcome straight away with no awkwardness.  During his visits to check us out, he had the opportunity to attend one of our BBQ weekends. We again managed to impress Michael, helping him to realise that we would be a great place to come and stay and help him get back on his feet.

In the couple of weeks that Michael has lived at Harbourside, he has brought colour and tropical sounds to the place, with his collection of exotic birds and his pet Bearded Dragon Lizard, Matty! Now Michael is well settled and people are seeing a change in him already with freshness to his skin and hair and a sparkle in his eye.   He is always willing and eager to get involved in whatever is going on around the house.

Hopefully things will go from strength to strength and Michael will follow in Lynda’s footsteps by having his own flat in the community, knowing that his friends and staff in Harbourside played a part in helping him when he needed it. 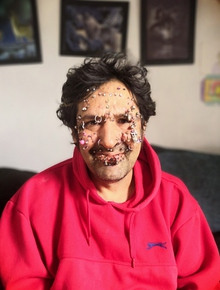