The stars and superheros were out in force as the East Region celebrated another successful participatory funding event.

The East Region held its annual Participatory Event on the 6th September at the MacDonald Inchyra Hotel in Grangemouth. Over 150 people supported and their staff attended the event which had a superhero / movie character theme. Many people made a real effort and we had some fantastic costumes including Superwoman, Harry Potter, the Blues Brothers, The Mad Hatter, Dorothy, the cast of Grease and an Oscar winner to name but a few. We were also joined by Aquaman and Hell Boy who oversaw proceedings. 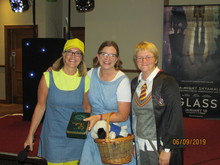 This year we had 40 bids which meant that we had more bids for funds than money so competition was fierce to get your idea voted for. Voting took place over a four week period and we had 130 ballot papers returned. Winners were a mixture of individual ideas, group activities and trips. The overall winner was Leven Community Disco which runs a very popular, fully accessible disco every Sunday night. Other winners included bubble football, go-karting, cultural events, parties, film nights and trips out. 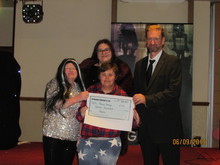 The aims of the day were having fun and enjoying time with friends. The day started with Richard our Regional Director handing out cheques to the successful bidders. This was followed by excellent entertainment from Gary James a magician who after his main act went round all the tables astonishing people with his magic tricks.

Once Gary had finished we had a high tea with plenty of scones, cakes and tea. We then had prizes for the best dressed supported person and staff handed out by Harry Potter and his Minion! The day was rounded off with a rocking disco where everyone danced to their favourite tunes until it was time to go home.

Everyone had a great time, and the Inchyra was a great location for the party. So that’s it for another year 2020 back to the 80s?

Participatory funding allocates a pot of money for each region with the condition that it must be spent on 'fun' activities which promote positive outcomes such as 'getting involved'  for all those who take part.  The people we support develop “bids” which are then voted on by people we support at local events. A lot of hard work goes into the bids and the events themselves.