We believe everyone should have the opportunity to have a bit of fun in their lives and we were excited to learn about the fun that James and Jacqueline from our Hinshaw Street Service have been having over the past couple of months.

In August, James had his annual visit to Edinburgh to see the Edinburgh Tattoo.  James has enjoyed this trip over the past few years with his family making it even more enjoyable for him by booking a nice hotel for the evening.  After having a lovely meal of Steak Pie and pudding and a bit of a rest, James and staff member David headed off to see the tattoo.  It was a late show of 10.30pm which gave James enough time for another of his annual visits, this time to The Fish and Chip Shop for his supper.

They then made their way through the crowds to their seats in the Gods where it was very windy and cold.  This didn’t spoil the fun and the show soon warmed everyone up!  James said it was an amazing show and he especially liked it when the pipers all got together.

James finished off his trip with a nice breakfast the next morning and a shopping trip which he particularly enjoys.  This year James bought himself a new dart set, a football, action figures and a really cool Edinburgh T-Shirt.

Here’s to next year James! 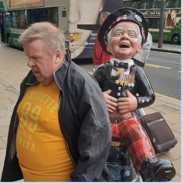 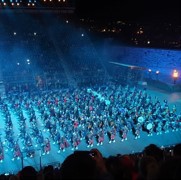 James then went with Jacqueline to see Still Game’s last ever show in the Hydro with another seat for James in the Gods!  Jack and Victor started the show with the rest of the cast joining in.  Jacqueline couldn’t stop laughing and James was on the edge of his seat!  After over an hour of laughing, it was time for a juice and sweetie break before the second part of the show started.  Before they knew it James and Jacqueline were watching a very emotional finale as the cast said their last farewell.

James and Jacqueline had a fantastic night and were very thankful to staff for finding them amazing tickets for a show which they thought had sold out.  They loved being there to say goodbye to two of their favourite TV stars. 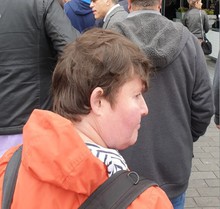 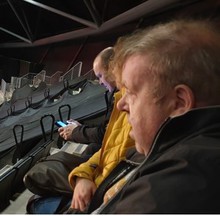