Ian lives in Muir of Ord and has been supported by TRFS for over 10 years. With time he has become more secluded and isolated.  He loves living in Muir of Ord but he is always talking about visiting other places and visiting his family in Inverness and Croy. This situation has become very difficult for him and resulted in signs of depression and he also started to display more behaviours that challenge.

Ian has loads of interests; he likes cars, lorries and heavy machinery.  He collects magazines and cuts out his favourite vehicles to create his own books.  He also likes ships, especially big boats like cruisers or warships. On a rare occasion one of his staff team was able to take him for a short trip to Invergordon to watch ships dock and sail or to Inverness Airport to observe planes landing and taking off. He loved those days and it became obvious that he need his own transportation so he could enjoy more days out and become less isolated.   The process however was not easy.  At first, Senior Support Worker, Pawel was able to rent a car for him for few months to further explore what he would like to use it for.

The difference in Ian was amazing!  From a depressed, excluded and socially isolated person he became happy and stopped avoiding so many social interactions. The car allowed him to visit his family in Inverness, especially his sister, brother in law and nephew. He started to take part in various activities he was never able to take part in before due to travel issues, like church meetings, gardening and visits to the TRFS office. He also started to plan longer and longer trips, trying to see as much as possible and was even able to visit Glasgow for day trips!!

This was a great success, but Ian was aware that this would not last, after all the car was rented and it was not financially sustainable for him to keep it for longer. This became a source of new anxiety for him and he was often was asking for how long much longer he would have access to the car.

After discussing this with family members and the Team Manager, Pawel decided to reapply for Ian’s high mobility rate to allow him to get access to a mobility car. This was challenging but after 7 months of gathering clear evidence and with the right support, Pawel was successful with Ian’s award and he could finally get his own car!

Ian was very clear about what car he wanted and before long, a white Honda Civic was on order for him.   It was important not to raise Ian’s anxiety so the actual delivery date for his car was kept a secret from him but the day came around quickly.  With agreement from Ian’s family and staff team a time and day for him to pick up his car was arranged.

It was a fantastic day!  It was a brand new start for Ian and he is now much happier and more relaxed.  Ian can’t quite believe his beautiful new car is his and even after a month, he is still asking staff if it really is his car! 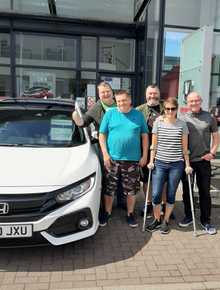 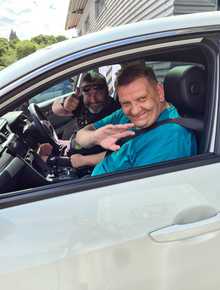