In 2010, the Pitairlie Service was opened in Dundee. The service provides housing support and care at home; supporting people with their mental health. For many, this meant coming from hospital to live there.  This was a big transition for all involved but ten years on, it is clear to see the positive impact that the Pitairlie Service has had. As 2020 marks a decade since the opening, everyone wanted to reflect on the past ten years and celebrate those who live there; past and present.

In December 2019, Support Practitioner Louise, proposed making a timeline including all of the individuals to commemorate the past decade.  This was discussed with Supervisor, Sharon, who had been at the opening of  the service in 2010. It was decided that a celebration would be held in November to mark ten years since the opening. A small team worked on the ‘decade celebration’. However, Covid-19 certainly gave the team a hard time with the constant changing restrictions and guidance for keeping everyone safe. The promise of a party certainly kept spirits high and although plans changed everyone was looking forward to the day. The staff decided that they would decorate the whole service in celebration. They spent months knitting, painting and making different decorations to make the occasion special. The residents got involved making decorations and painting. While the original party could not go ahead, everyone was determined to make it a special celebration regardless.

The theme for the celebration was “seasons of time”. Pitairlie was decorated with the different seasons of the year, and a timeline of the last ten years. For Spring there was a vegetable patch which represented the Pitairlie vegetable garden that which a huge success this spring. For Summer there was a beehive which included some lovely bees painted by all of the residents. Autumn was a large tree and all of the residents and staff used their handprints for the leaves and for Winter there was a snowman made up from pompoms that everyone had made from wool. 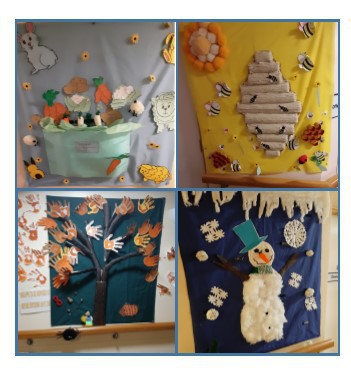 The different seasons had interactive elements such as the “snowball throw”. Residents and staff threw handmade pompoms at the display and if they stuck then they would win a prize. On the Autumn display, there were two poppies in remembrance of two of the residents who used to live there. There was a timeline of when all of the residents moved into Pitairlie, with their hands and footprints drawn around it.

All of the residents gave their memories from when they first moved in and wrote on some cards to go in the Pitairlie time capsule. They all chatted fondly together remembering stories from the last ten years. After each person wrote their memory they chose a prize from the lucky dip, laughing at the funny prizes that staff had put together for them. The time capsule included photos of all the residents, memories and well wishes from staff. It had a scrabble letter of each of the resident’s names and feathers for past residents. It was a great day of memories and reflection and the time capsule allowed for thinking into the future, what their hopes and goals were.

The time capsule was left for other staff and services to write well wishes and is buried in the Pitairlie garden; to be dug up in five years time. 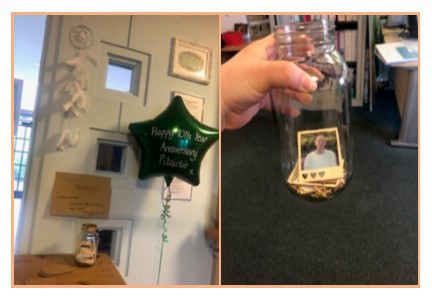 The atmosphere in Pitairlie during the run up to the party was like a family Christmas. The individuals baked cakes, hung decorations and set up karaoke; giving it a few test runs the day before the party... just make sure it worked of course! There was a presentation made with all of the best photos from the last ten years, this was shown in the sunroom which had been blacked out and decorated with fairy lights and a large projector screen which displayed all of the photos and memories. There were almost 200 photos on the presentation and even old photo books to look through.

On the day there was a large buffet, karaoke, games and music. Everyone enjoyed the interactive displays and the photos. They were also delighted to find out that their participation bid was accepted and the dining furniture they all voted for was delivered during the celebration. This will be used for the monthly Pitairlie Lunches which have been a favourite since lockdown and gives the residents a space where they can relax and chat to each other.

Below are some quotes from the day and memories from the time capsule: