As some of you may be aware, Penicuik is reported to have its own climate and when the Beast from the East 2 hit the whole of Scotland, Penicuik was hit particularly badly.  However, with the help of three of  the individuals we support in Midlothian, walking on the pavements was made easier for the neighbours.

David, Paul and Jordan have spent the last two weeks clearing snow daily to ensure that the  neighbours  can walk on the pavements safely.  David even enlisted the help of a passing plough by asking if they would clear the car park so staff and the other supported people could get out in their cars.

Clearing the snow was a never ending task, as quickly as the snow was being cleared, twice as much was falling,  David, Paul and Jordan were relentless in their want to clear the snow and on some days were out there for 6 hours, only taking a break for lunch.  Their enthusiasm to clear the snow was remarkable and this was made especially important for the neighbours, given that many people are isolated due to COVID-19 and the only time they get out is for daily exercise or for essential shopping.  For some, the simple act of clearing the pavements will have meant a lifeline to the outside world. To say we are proud of these three individuals is an understatement!

Staff member, Neil, came up with a song for everyone to sing along to whilst clearing the paths. 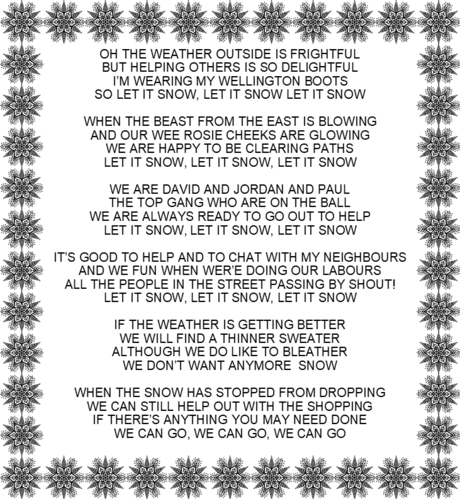