Kenny, from our Woodside Service, has recently celebrated a very big birthday - THE BIG 65th.

Kenny’s support staff, Amy and Callum, knew exactly how to make Kenny’s 65th Birthday a memorable and special day for him.  They made sure they included all the things that bring Kenny enjoyment and make him happy!

Kenny loves music, collecting trinkets for his flat and making his home look festive no matter the season. Amy found the perfect gift for Kenny taking all these things into consideration!

Callum and Amy decorated the staff office with balloons, banners and got Kenny his favourite cake in before inviting him down for a nice wee surprise. Amy set up his present which was a sensory light projector and connected it to the service tablet and put on a playlist of Kenny’s favourite songs, starting with a HAPPY BIRTHDAY chant of course for Kenny’s arrival.

Kenny was delighted with his projector and could not take his eyes off it. Kenny enjoyed a jig or two and some laughs and jokes before dancing his way back to his flat with his cake and gift.

Kenny said that he felt on top of the world on his birthday and has been giving the rest of the team a demonstration of his new trinket during his support each day. 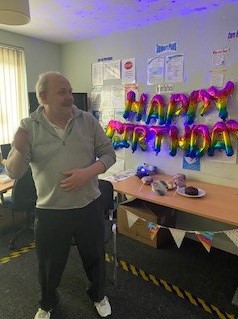 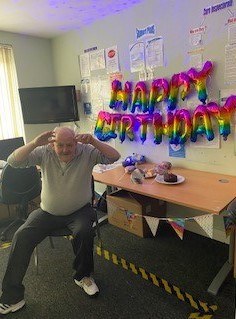 HAPPY 65TH BIRTHDAY KENNY! From everyone at Woodside!