Geoff, from our East Renfrewshire Dementia Service wanted to share his story with us.  With support from Senior Support Worker, Kim, Geoff tells us in his own words about his amazing life and how TRFS are providing encouragement and support to help him continue to build his dream!

"Having been raised in the County of Kent (The “host” County) in 1940 for many of the air battles that took place defending the country from a potential invasion from Europe, it was inevitable that some of the glamour associated with that period of our history should be instilled into the minds and imagination of schoolboys. Little boys would frequently be seen in the school playground running with their arms outstretched as they flew in their imaginary Spitfire, firing their imaginary guns at imaginary targets. As young children my brother and I used to go into the garden and spend many hours digging for spent Spitfire shell cases that had been ejected from low flying aircraft during World War II.

I was born in 1942 and started school in 1947. Four years after the cessation of hostilities, legendary Spitfires were still flying regularly in the skies above Kent!

Is it any wonder that as I grew older, and left school to work as an aircraft engineering apprentice with the world’s oldest aircraft company that I never lost that “soft spot” for the iconic Spitfire.

Over the years I have built a few Spitfires, from the humble 1/6 pence plastic kit to larger scale models, but without any means of creating the thrill of replicating the excitement of real flying.

After retirement I decided to take steps to make a boyhood dream come true. I ordered a 1/5-scale kit of a Mark IX Spitfire; the model was based upon a full size Spitfire that had taken part in the D-Day landings on 6th June 1944. I was born on 6th June 1942.

So armed with a model Spitfire, a top of the range radio control outfit and a powerful 2-stroke engine I set out to bring my dream to life. The cost is a state secret!!!

To let you understand. I bought the Spitfire in 2015 before I was diagnosed with Vascular Dementia in 2017. Like everybody with a diagnosis of Dementia, Anne and I had to adjust our lifestyle in order to start to live well with Dementia.

When diagnosed I always used to make the quip, “with all the time I have, my wife, my faith and my sense of humour I would surmount any problems or challenges that came my way”!

Here are some of the problems encountered and challenges faced in getting this Spitfire project into the air.

As of the start of January 2021 the work needed to complete this project is: -

Completion is not expected to be until the end of 2021"! 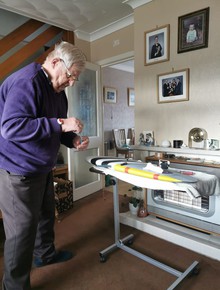 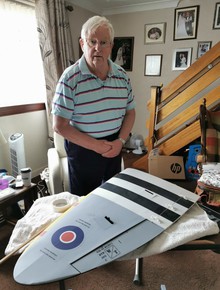 Thanks to Geoff for sharing his amazing story and his project with us!  We can’t wait to see this amazing Spitfire in full flight!