Angela from our Johnstone Services has a jar that she saves loose change into.  She has spoken for some time about filling this jar and donating this to charity.  Angela said she would love to give to people who need it and this would make her feel happy knowing she has helped.  As a staff team, we said we would support Angela to make this happen.

Senior Support Worker Lisa, spoke with Angela about how to make this happen.  Lisa then liaised with Carol – Anne Lamont (SVH, Income Generation Lead) via phone call and email to arrange a suitable time and date for Angela to visit and drop off her donation.  Angela was delighted with this arrangement and excited to carry out this good deed.

On the 11th June, Lisa supported Angela by taxi over to St Vincent’s Hospice in Howwood.  Angela met with Curtis outside, in line with COVID-19 guidelines.  Curtis presented Angela with a laminated certificate and Angela made her donation of £137.30.  Angela chatted with Curtis and got her photograph taken.  Curtis was very thankful to Angela for her donation.  Angela was emotional in making her donation and was thankful in return to Curtis for accepting her generosity.

On return home, when Lisa asked Angela how she felt, Angela replied “I am so happy”.  Angela went onto say she would like to fill her jar up again and donate to St Vincent’s Hospice again as this meant to the world to her. 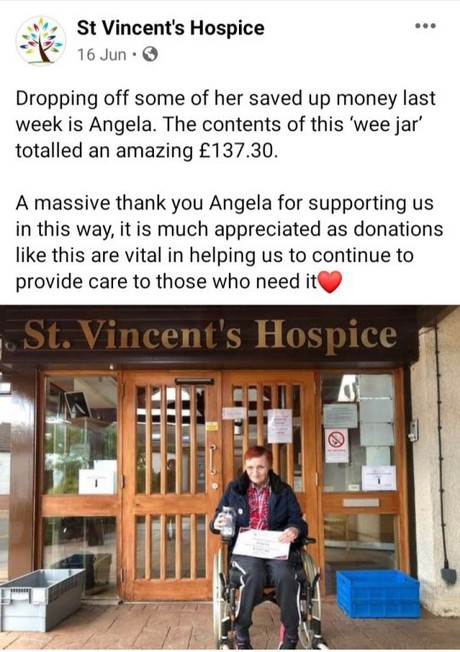