Fun for all at Pitairlie!

As part of our organisational mission and values, we promote and encourage participation so that people can feel involved and have fun!  At our Pitairlie Service, everyone was excited to get involved in organising a traditional Scottish Gala Day.

Two of the guys offered to help bake, Dougie said he would DJ and another two individuals were going to run the beat-the-goalie stand. They all asked for a ‘splat the staff’ stall where they could raise money by paying to throw wet sponges.

For Dougie, it brought back fond memories of the Broughty Ferry Gala Days from when he was a young man and he couldn’t wait to start organising the music to make sure he accommodated everyone’s music tastes.  He even hunted in charity shops to find CD’s that he knew other residents would like.

Dougie told staff that when he was young he would get invited to parties to DJ and he even had a fabulous name for everyone to remember him – the “Razzle Dazzle Roadshow”.  Dougie had always been passionate about music and loved it when others enjoyed his music collection. On Gala Day, a booth was made up for Dougie including a sign with his old DJ name. He was delighted and his music was enjoyed by all.  Dougie said “I’ve kept the sign, reminded me of good times when I was young. It was a brilliant day and the music went down really well”.

The ‘Beat the Goalie’ stall was run by the two football fanatics of Pitairlie!  The guys enjoyed scoring points to win a prize. It was won by the youngest resident but the older ones gave it every best effort to beat the youngster. 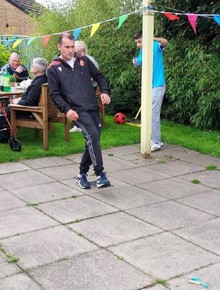 Everyone also enjoyed the homemade cakes and afternoon tea while chatting in the garden using the furniture which purchased with their participatory funding won last year. 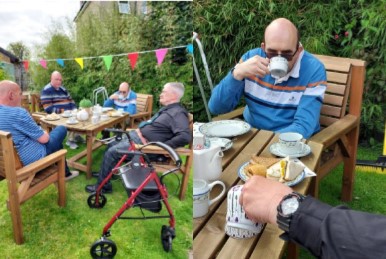 By far, the ‘splat the staff’ was everyone’s favourite.  For the chance to ‘splat the staff’ there was the tricky challenge of hooking the duck! Everyone tried really hard and there were plenty of sponges thrown at our good spirited staff who took wet sponges to the face on a cold gala day to raise money for the Pitairlie comfort fund. These wonderful staff put in lots of effort (and a brave face!) to ensure it was a great day for all and overall, between the raffles, booths and games they were able to raise £100. 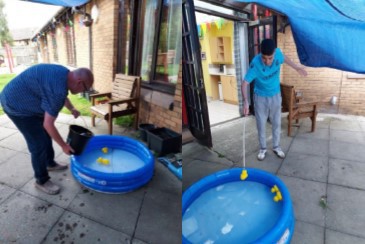 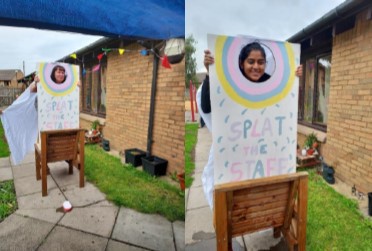 Staff would like to extend a special thank you to those involved, the businesses and families who donated prizes.