On Friday 20th September the Dundee Services held a Participation budget event which was a huge success!

All supported individuals and staff were involved from the very beginning to ensure the day turned out just as hoped for. Ideas were thrown around from karaoke to a BBQ to a tie-dye experience.

The venue was decorated with home made decorations to cheer the place up and ensure everyone started to have fun as soon as they arrived.

With the smell of the BBQ going around, everyone filling their bellies was definitely the first port of call for all. After the BBQ there was yummy homemade cake, tea and coffee then the fun activities started.

Everyone tried their luck to hook a duck to win a prize but only the odd numbers were winners. Even with a few hiccups during the bingo, the players still had fun.

Plain white t-shirts were given out for all to try the tie-dye. With all the t-shirts drying on the line, the tie-dye was the biggest success! We think we may have started a new trend in Dundee.

Each of the services was asked what would make a difference for the individuals in the services and on outreach and a number of ideas were put forward in the context of presentations on the day. The three successful bids that received the most votes were:  Pitairlie were looking for a TV and Wii for the communal area; Kingsway for new furniture for their conservatory and raised flower beds; Clepington wanted their back garden made secure and fenced off so it could be used and enjoyed and an outing for outreach.

An individual and member of staff from each service gave it their all when delivering their proposal using pictures and jokes. With all proposals being so great, money is to be split over the three services and outreach. 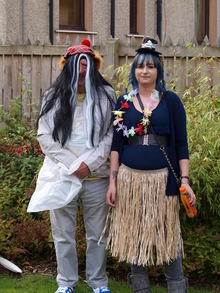 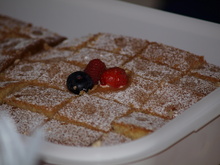 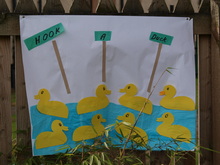 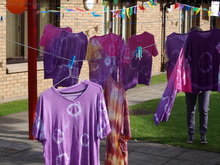 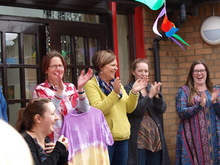 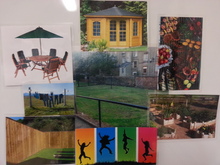