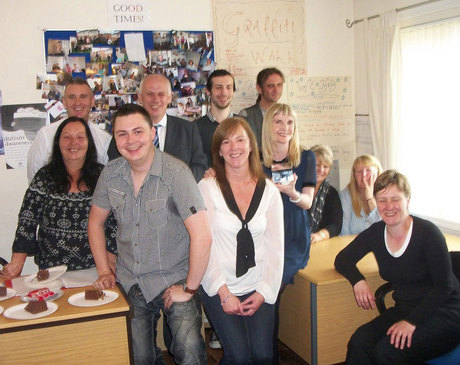 Congratulations to the staff at our Elliston Drive service, who have received an award from our Chief Executive Austen Smyth, in recognition of the high grades that were achieved in their un-announced inspection by the Care Inspectorate earlier this year.

Staff at the Elliston Drive had originally been made aware by Area Manager Dale Houston that the service was being considered for an award and that the inspection report clearly evidenced improvements that had been made in the service to warrant it.

Team Manager Annie O’Rourke said: "The prospect of an award and the acknowledgement of the team's hard work raised the morale and mood at the time when the team were facing significant changes in staff structures.

When it was confirmed that we were to get an award for our efforts, which we affectionately named ‘the wee hoose award’, we were all over the moon. It does mean something, it creates a feel good factor and we got to share a moment.

We really appreciate the time set aside by our Chief Executive in giving Elliston this award and as a result we are continuing to capitalise on the positive rippling effect it produces and putting it into our work."